Karuna Care Education equips students with the basic tools they need to offer persons in crisis competent, well-informed emotional support and spiritual care. We provide introductory-level training for persons of faith who wish to enhance their interpersonal awareness and skills in order to become a compassionate presence in the lives of others.

We envision a world where every faith community has at least one Karuna Care Chaplain to journey with and support its members through the many life-cycle challenges each of us are destined to face while living in the material world. Attaining pure love for God is a gradual process that is enhanced by the fellowship of caring, supportive companions. Karuna Care Education wishes to help its students learn the science and art of creating cohesive, caring communities one heart at a time – whether those communities are large or have as few as two people.

Rambhoru was initiated in 1974 in Cologne, Germany, by His Divine Grace A. C. Bhaktivedanta Swami Prabhupada. She spent the next twenty-six years assisting her husband, Prithu Dasa, to establish and manage ISKCON temples in Germany, Switzerland, Ireland, and India. During that time she and her husband had two sons, Madan Mohan (Madi) Dasa and Nila Madhava (now Sri Madhava Mahotsava) Dasa. In 1999, Rambhoru returned to Guilford College to complete her BA in Religious Studies, and spent the next ten years studying interfaith dialogue, practical theology, pastoral care, and religious education. She also earned a Master of Divinity degree from Claremont School of Theology, completed four units of Clinical Pastoral Education at Yuma Regional Medical Center in Arizona, and earned a masters degree in Patient Counseling at Virginia Commonwealth University, where she worked as an adjunct faculty member at the Allied School of Health. In 2007, Rambhoru began training to be an ACPE Certified Educator (www.acpe.edu) at Virginia Commonwealth University, and served as resident senior chaplain there.

In 2008, Rambhoru became a Board Certified Chaplain with the Association of Professional Chaplains (www.professionalchaplains.org), a fourth-level Healing Touch Practitioner, and a therapeutic harpist while ministering bedside to suffering persons at the Virginia Commonwealth University Hospital. In 2010, Rambhoru became the Director of the St. Camillus Center for Spiritual Care: Urban Interfaith Chaplaincy program in downtown East Los Angeles, which serves patients at the Los Angeles County Hospital and University of Southern California Medical Center, Eastlake Juvenile Prison, Homeboy Industries, and other inner-city hospitals, hospices, and projects. Rambhoru became certified as an ACPE Educator (doctorate equivalent) in Clinical Pastoral Education in 2015. Rambhoru has been a member of the ISKCON Prison Ministry since 2015, and has corresponded with and provided Srila Prabhupada’s books to prison inmates since that time. 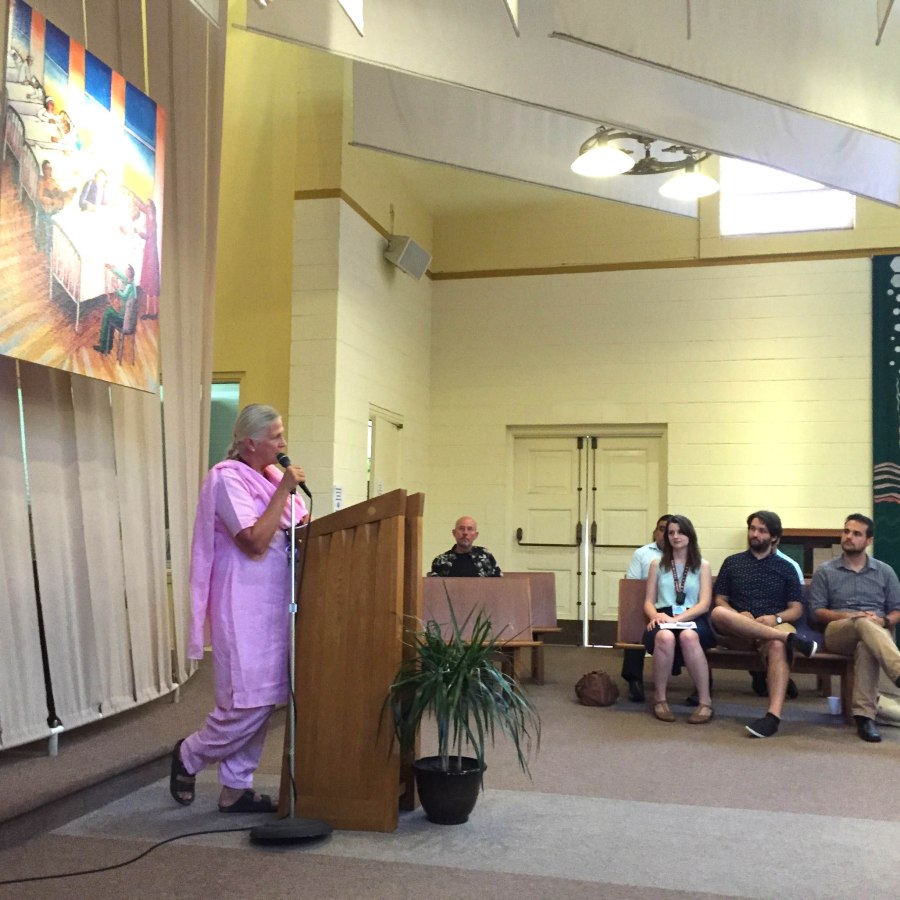 In 2017, Rambhoru took a leave of absence from her directorship at St. Camillus Center and relocated to Northern Virginia to care for her elderly parents. After her 92-year-old father died on New Year’s Day in 2019, she began to serve at the ISKCON of DC temple in Potomac, MD, counseling congregational members, writing blog posts for the ISKCON of DC website, assisting the ISKCON of DC book table and harinama parties, and providing spiritual care and counseling to airport staff and passengers at the Dulles International Airport in Washington, DC on behalf of ISKCON.

Rambhoru has served as a part-time contract chaplain training supervisor, both in-person and online, at Mary Washington Hospital in Fredericksburg, Virginia, the St. Camillus Center for Spiritual Care in Los Angeles, and the Institute of Clinical Pastoral Training (www.clinicalpastoraled.edu).

For a long time, Rambhoru wrestled with how she might use her many years of study and practice to serve her spiritual master, His Divine Grace A. C. Bhaktivedanta Swami Prabhupada, founding spiritual master of and visionary for the International Society for Krishna Consciousness (ISKCON). In 2017, after taking a leave of absence from her directorship at St. Camillus Center, Rambhoru strategized how she might use her education as an offering to Srila Prabhupada. Through an ongoing process of prayer, consultation with ISKCON leadership, and experimentation with distance-learning programs, Karuna Care Education gradually evolved.

Rambhoru seeks to serve the ISKCON Vaishnava community by training qualified, second-initiated devotees as lay ministers, or chaplains, equipping them with the tools to work in settings such as hospitals, hospices, prisons, assisted living homes, orphanages, and within ISKCON communities, as compassionate caregivers and servants.

Damayanti Dasi grew up in New Vrajamandala, Spain, and at the age of 19 moved to Brazil to study Vaishnava Theology at the Jaladuta Institute, with Dhanvantari Swami. In 2009 she became his initiated disciple and decided to move to Mexico and join the local ashram. For the next year she traveled around cities and towns introducing Srila Prabhupada’s texts to Universities and other institutions. Soon she moved to Buenos Aires (Argentina), where she trained in person-centered counseling, following humanistic psichotherapist Carl Rogers’ method. She spent 10 years working for The Bhaktivedanta Book Trust as a Communications Specialist. In 2020 she completed Level I of Pastoral Care Education with Karuna Care Education, and obtained her certification as a compassionate companion. She’s part of the team of facilitators and is teaching the introductory courses in Spanish.

Jiva Tattva Dasa has been practicing bhakti yoga for over twenty-five years, and is an author, coach, mentor, and motivational speaker. He is a disciple of H. H. Gopal Krishna Goswami. He volunteers at Karuna Care Education, providing technical support and other related services. He is a certified Bhakti Shastri teacher and currently gives Srimad-Bhagavatam classes, facilitates Bhakti Vaibhava education, and conducts seminars on topics related to bhakti. Jiva Tattva has served as a book distributor on the North American sankirtana team, facilitated namahatta programs, and helped the ISKCON of DC harinama party. He has a Masters in Computer Science from Johns Hopkins University and works in the technology field.

Hari Nam Harris, joined ISKCON Montreal in 1983, moving to New Vrndavan and accepting initiation the following year. Serving for many years in different capacities she became a teacher and consultant with a Bachelors in Child psychology and education.  She also completed the training with Iskcon’s Child Protection Office and the Iskcon Resolve training course on Conflict Resolution and Ombudsman as well as her Bhakti Shastri course. Homeschooled two boys and serves in  children’s educational programs as much as possible.  Passionate about gardening and devotee care, she works with her son in the community flower garden, and offers compassionate listening care to devotees around the world.

Hari Nam joined Karuna Care in 2020, inspired by Rambhoru Devi’s desire to offer the vaianava society trained compassionate care givers. Growing in the process of self discovery, she is very excited to share it with others. Educating and offering reflective listening in groups and individually.

Sri Haripriya is a disciple of HG Bhurijana prabhu. Originally from Israel, is currently living in Australia and an active member of the New Govardhan farm community.  Haripriya serves as a Shastra and cooking teacher at the Bhaktivedanta Gurukula among other community services and, together with her husband, is raising a family of four adolescents, currently in between the ages of 15-21. Haripriya and her family lived in Sri Mayapur for 5 years where she was engaged in serving as a facilitator of all kinds of youth programs and activities as well as a Shastra teacher at the Sri Mayapur International School and as Parent Association leader. She was a carer in the Sri Mayapur care and support team and offered practical, physical and mental support to devotees in need. She is a certified Reflexologist and Naturalist. Haripriya is very much inclined to assist and care for the devotees, offering a nonjudgmental and compassionate listening, creating a safe space for self exploration, self discovery and heart connection in an encouraging and uplifting environment in order to strengthen spiritual authenticity, spiritual relationships and spiritual fulfillment in Bhakti  practice.

Krsnangi started practicing Krishna Consciousness in Australia. She lived in a Farming Community in New Zealand in 1990, engaging in prasadam distribution and temple services, and also preached in New Caledonia. Returning to Australia she served in the local Temple of Sri Sri Radha Gopinatha, doing Deity service, teaching Vedic Scripture in Primary and Secondary Schools , and coordinating a Vaishnavi Outreach Program which included a study group, singing and the Community Radio Program “Inspirations”.

Krsnangi undertook studies in Counselling and Pastoral Care with the intention to be of service in supporting devotees, which has extended to the broader community with volunteer chaplaincy roles in a General Hospital, Mental Health Hospital Aged Care Facility, and compassionate caring skills in her Yoga teaching. She holds a Diploma in Holistic Counselling & Life Care.

Yamuna was first introduced to Vedic philosophical teachings and the Bhagavad Gita when he was 15 years old in Nigeria. Apart from a hiatus during his wild college years in Spain and St. Louis, he has had a strong eagerness to learn and grow spiritually. In addition to his day job as a Senior Manager of Electrical Engineers at Aprilaire, he is an ordained priest in the Gaudiya Vaishnava Hindu tradition, an experienced Spiritual Educator, and has spent the last 14 years reaching out to college students to share ancient practices of meditation and bhakti yoga. He currently volunteers his time as the Director of Outreach at ISKCON Chicago, and provides pastoral care from his 320 hours of training in life-crisis and grief counseling. Yamuna is also a trained mediator, and avid champion of team & relationship building within organizations. He lives with his wife Sri Radhika dd, and 2 boys, Gopinatha and Sri Jiva, just north of Chicago city.

Sarasvati Sheikh (a.k.a Syamala Priya) is a Licensed Clinical Social Worker who enjoys working with children and families.  Her specialty includes working with clients who have challenges with overwhelming emotions or behaviors, and difficulties in their relationships due to unresolved trauma, chronic stress, grief or loss.  She has trained in Trauma-Focused CBT, Attachment Regulation Competency (ARC) Framework, Trauma -Informed Play Therapy, Mindfulness-Based CBT, EMDR and Yoga-Based Psychotherapy.

Ekavira Das is a trained Hospice Caregiver, a certified Holistic Health Consultant, as well as a recent graduate from the Karuna Care Education program for pastoral care.